When it comes to historic restoration, it’s not unusual to face some challenges along the way. Colonel and the team have had their share during this project.  But, Colonel felt quite lucky with a particular surprise that showed up -- something he’d never dream of finding.

The Legacy of Moses Eaton Comes to Lynnville, Tenn.

Payton Hewitt made a rare discovery. While checking out a nearby home being torn down in search of salvageable materials, he found some old boards that were marked with a rare stenciling. He took the boards and showed Colonel. Looking further into it, they found that this stenciling resembled a distinctive art form dating back to the 1700s that originated from a notable artist in New England. This was a rare find, and Colonel knew they would serve a special purpose.

Watch the video as Colonel explains this curious find. Moses Eaton and his son Moses Eaton, Jr. left a legacy across New England in the folk art design of wall stenciling.

The distinct art of wall stenciling and the patterns created by Moses Eaton date back to the 1700s in New England.   It was a popular form of decorative folk art through the 19th Century and often used as a popular alternative to wallpaper, which was considered a luxury at the time.  Moses Eaton was the original stencil artist most well-known for these particular designs, and his son carried on the trade.   It is likely that the boards Colonel has now were painted by a follower of Eaton’s work.

Nature offered much of the inspiration behind this artwork.  Colorful displays of flowers, pine boughs, flowing vines, oak leaves, flower baskets and more were symbolic  --  pineapple for hospitality, flowers for friendship, the oak leaf for strength and loyalty.

Followers of Eaton’s work were known to take the trade south. Stencil art was discovered in Clifton, Tennessee,  in a historic home that was saved from destruction. The home was moved to the Ames Plantation in West Tennessee and is considered to have one of the most extensive examples of this decorative painting anywhere in the region. This was likely the work of a traveling painter who utilized stencils similar to Eaton. This work has been found in other homes located in Tennessee, Kentucky, Ohio, and Indiana raising the possibility that the Stencil House painter traveled throughout the region working his trade. Though, the true identity of this painter is still largely unknown.

Read more about the Stencil House at Ames Plantation.

A Colorful Touch to the Andrew Jackson Tavern

Nothing like these stencil boards had been seen in this area before.  As Payton inspected the boards, he concluded that they had already been re-used for the house being torn down,  considering their age and probable origination.  That would make the Tavern the third time these boards have been used.

Once the boards were gathered, they were readied for use. Tacks and nails covered these boards indicating that layers of wallpaper once covered them up.  After giving them a thorough cleaning, Payton brought the boards to the tavern, lined them against the wall to match their patterns and devised a plan on how they would be placed together.  They would be installed upstairs in the tavern, on the walls and ceiling. 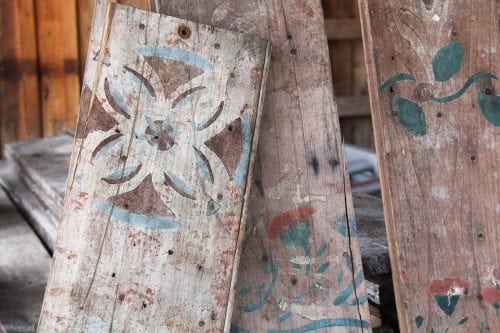 Payton and Corey had to spend some time cleaning and stripping the boards of any remaining wallpaper and staples. Payton lined up the boards looking for similar patterns.  If he couldn’t find matching patterns, he had to devise a plan as to how they would best work together.

Colonel decided that the entire second floor would be covered with these stencil boards.  Some of the design is bright and legible, while some is more muted. A coat of linseed oil brought out a richness in the stencil boards, which have added distinction to this historic building.

Coming Up, the Finishing Touches On the Tavern and Final Reveal!